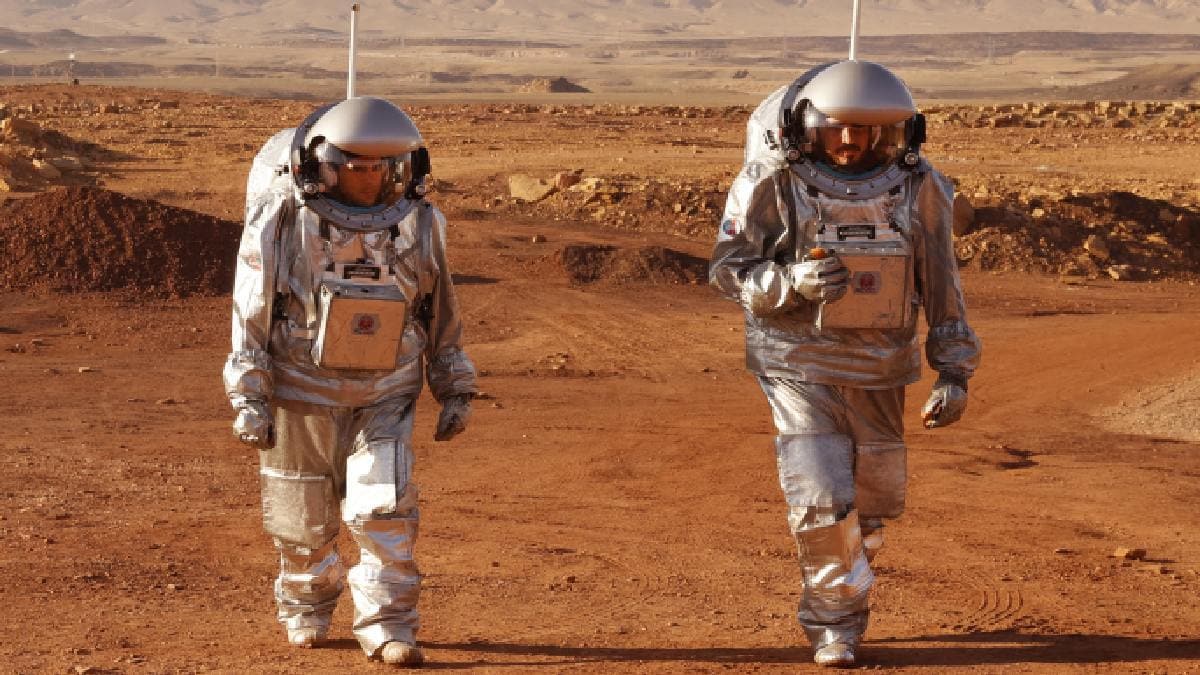 Inside a huge crater in Israel’s sun-baked Negev desert, a team wearing space suits ventures forth on a mission to simulate conditions on Mars. The Austrian Space Forum has set up a pretend Martian base with the Israeli space agency at Makhtesh Ramon, a 1,600 feet (500m) deep, 25 miles (40km) wide crater.

The six so-called “analogue astronauts” will live in isolation in the virtual station until the end of the month.

The participants – from Austria, Germany, Israel, the Netherlands, Portugal, and Spain – all had to pass gruelling physical and psychological tests.

During their mission, they will conduct tests including on a drone prototype that functions without GPS, and on automated wind- and solar-powered mapping vehicles.

The mission will also aim to study human behaviour and the effect of isolation on the astronauts.

“The group’s cohesion and their ability to work together are crucial for surviving on Mars,” said Gernot Groemer, the Austrian mission supervisor.

“It’s like a marriage, except in a marriage you can leave but on Mars you can’t.

The Austrian Space Forum, a private organisation made up of aerospace specialists, has already organised 12 missions, the most recent in Oman in 2018.

The Israel project is part of mission Amadee-20, which was expected to kick off last year but was delayed due to the COVID-19 pandemic.

The forum has partnered with Israeli research centre D-MARS to construct the solar-powered base.

German astronaut Anika Mehlis, the only woman on the team, told AFP how happy she was to be part of the project.

“My father took me to the space museum when I was little,” she said. “When I saw that the forum was looking for analogue astronauts, I told myself I had to apply.”

Mehlis, a trained microbiologist, will study a scenario where bacteria from Earth infect potential life forms that may be found on Mars, saying this “would be a huge problem”.

Visually, the surrounding desert resembles the Red Planet with its stony wilderness and orange hues, though thankfully not in terms of atmospheric conditions.

The interior of the base is austere, with a small kitchen and bunk beds. Most of the space is reserved for scientific experiments.

NASA envisions the first human mission to Mars will launch in 2030.

“What we are doing here is preparing a large mission, the largest voyage our society has ever taken, as Mars and Earth are 380 million kilometres apart at their extreme point,” said Groemer.

“I believe the very first human to walk on Mars is already born and we are the ship-builders to enable this journey.”

NASA’s Mission Lucy Is Going Where No One Ever Has: Jupiter’s Asteroids